Hello everybody, yeah I know. It has sure been a while since I posted on this blog, I’m sincerely sorry for that, but I haven’t yet got use to manage school and my blog at the same time😅. So as an apology, I’ll offer you a small selection of anime for you to watch and that will cheer you up a little. Anyway my name is Kayfrid’s Memory, welcome on Busta Jungle, hope you are doing good and here is my selection of musical anime you need to watch for this week. Finally, you can’t imagine how much of a fantastic news this is for me. I can finally write about this amazing anime now that it’s done. Seriously, for those who were living in an apocalypse underground world and then may have not heard about this new music anime that just ended this October (and that you can even find on Netflix😏, just saying.) WHAT ARE STILL DOING WASTING YOUR TIME IN HERE!? GO AND WATCH THAT FUCKING AMAZING ANIME RIGHT NOW!

Okay, I should probably calm myself down and give you some info on this show that can only be found in his anime form (as far as I know). In this new fantastic show, you will follow the adventure of two girls Carole and Tuesday in their journey of becoming the one superstar that changed everything. I surely absolutely recommend this anime, the graphics are pretty simple and just because of that simplicity, it make’s it very beautiful. And of course the very reason why I am doing this post is because the anime has a lot of astonishing songs, with which I’ll be fully honest ARE AMAZINGLY TRANSCENDENT. The songs are really on a whole other level and are emotionally busting. My favourite song is “THE LONELIEST GIRL” you’ll understand when you will watch the show, it’s not something to explain, it’s something to hear and feel it flows into your body and go through every itch of it. Really, missing this will be a HUGE MISTAKE.

Summary: Set in the future on a partially terraformed Mars, teenager Tuesday Simmons runs away from her affluent lifestyle as the daughter of a politician and makes her way to Alba City to pursue her dream of being a musician with just a suitcase and her Gibson acoustic guitar. On her first day in the city, she crosses paths with Carole Stanley, another aspiring musician who plays the piano, and the two decide to team up as a singer-songwriter duo under the name Carole & Tuesday. 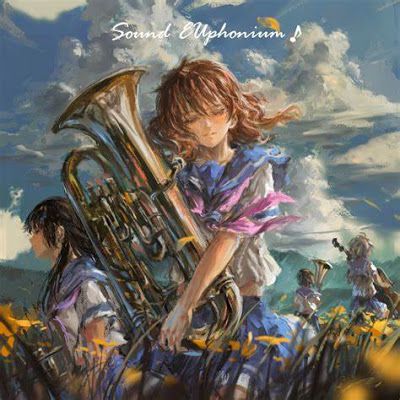 Ah! It almost feels refreshing to talk about this anime again, for those of you who maybe following me since my young debut on my blog, you surely remember the beauty of this anime, which by the way, it also exist in his manga and novel form, so for the manga lovers feel free to go check it out. it’s been 3 years now since the last time I saw the anime form of Sound! Euphonium, but I still have some vivid memories of the fantastic sceneries, the amazing story telling from beginning to end and the charismatic and unforgettable attaching characters of the show.

This is by far the MOST WATCH IN THE ABSOLUTE INSTANT. I’ll definitely come back and watch this anime again and why not make a sort of reaction on it (I don’t know yet). Well, I definitely ask you, plead you and order you to watch this anime at all cost. Either, you can read the manga or the novel or you can watch the anime, it’s not very long and you will not feel the time flies (trust me). Oh! And small warning, there’s presence of some GL (Girl’s Love) in the anime, manga and novel. You have been warn.

Link to the post I made on this anime Hibike! Euphonium Hell yeah guys (and girls), you surely heard about this one heart warming anime whose 1st season started in July and ended this last September. Only one word is made to describe this, GORGEOUS.

No really, that’s all is needed to be said for this anime, it’s just astonishingly gorgeous. I would like to say that I started to watch the anime version first, after then, I switched to the manga because I found it hard to wait for the next episode every single time. So, now I’m on the manga form and without exaggeration, I am highly proud to have switch, because it’s even more better in the manga version and I don’t have to wait much to read the next chapter.

Nonetheless, it doesn’t make the anime version less good, I still continue to watch the anime and I was scared to be disappointed with the singing parts, since in the manga they looked wonderful and all shiny. BUT I got none of that, it was even better than what I was expecting, they truly made a great job on that side. For real, go and watch or read this show on wherever you read your usual manga, manhwa and watch your anime.

Well, that’s it for me today, I hope you enjoyed this short moment together and that you will go and check out those anime. Hope to see you soon for another discovery.