A mysterious tree known as Yggdrasil would often appear in the world of the humans, releasing many small orbs into the human world. A small proportion of the orbs are special ones known as "Time Fruits". If a Time Fruit enters a female, she becomes Immortal. If a Time Fruit enters a male, he becomes a crazed winged being known as an "Angel". Rin Asougi is an immortal who runs a private investigation agency in Tokyo's Shinjuku district alongside her assistant, Mimi who is also immortal. Rin often converses with a mysterious unknown individual on the phone. She is often being hunted down by an assassin named Laura who was hired by Apos, an angel who persecutes immortals and is the current guardian of the Yggdrasil.

The story begins in the year 1990. During a search for a missing cat, Rin instead finds Koki Maeno, a young man with distorted memories. As she investigates his past, she discovers that he is a clone created by Sayara Yamanobe, a woman searching for immortality. After discovering this, Koki decides to work for Rin in her agency. In 2011, Koki marries a former client, Yuki. Sayara Yamanobe returns, kidnaps Rin and attempts to attack Japan with biological weapons. Koki, after becoming an Angel, sacrifices himself to save Rin and Japan. In 2025, Rin ends up investigating a case involving Koki's son, Teruki, after he meets his long-term cyber girlfriend in reality. Rin manages to save Teruki; however, she ends up sacrificing herself.

In the year 2055, Rin has lost her memory and goes by the name Tamaki Saito. She had fallen in love with a mortal man named Ihika. However, she regains her memories when Laura discovers she's alive and attempts to kill her. After Apos kidnaps Rin, Mimi and Teruki's daughter Mishio travel to Apos' castle to save her. Rin is locked in a room with an angel and kills him, later discovering him to be Ihika. It is revealed that the unknown man on the phone was Tajimamori, Rin's savior from a thousand years earlier, a former guardian of the Yggdrasil, and Apos' father. After impregnating Rin, he is killed by Apos, who is himself locked away in the roots of the Yggdrasil. Later, Rin gives birth to a baby boy, who will one day become the tree's new guardian. 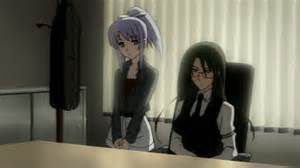